Written by Punter Planet on December 4, 2015. Posted in Advertising Blogs

While most escorts in Australia are able to advertise with photos that show their full bodies, Melbourne escorts ads are restricted to the display of head and shoulders only. When an escort blurs her face for privacy safeguard, what remains is pretty much next to nothing. While most escorts in Australia can work from the safety of their own home, laws in Victoria force escorts to a level of increased danger by only allowing them to offer outcall services.

Although sex work is legal in Victoria, it is heavily regulated by laws designed for the world of 20 to 30 years ago. Even if the 1994 Prostitution Control Act came into effect that year, you can easily imagine that it gathered even earlier ideas and concepts. The act was amended in 2011, and despite a friendlier name (Sex Work Act), it mainly was just tweaked in response to complaints by brothel operators. There wasn't much acknowledgement to the fact the world had changed in a thousand ways since 1994.

With its 2011 name, the act acknowledges that sex work is work, and that is not a small thing. However, the rest of it lacks coherence in that respect, as most of its content discourages anyone from choosing sex work as an occupation, or at least makes it very difficult to do so. Melbourne brothels may not advertise looking for staff, and Melbourne escorts, apart from the restrictions noted before, may not list the services they offer, nor add any description about their ethnic background. So, whether you are a high class Asian escort or a beach bunny Aussie blonde, you are not allowed to say so.

All this is just plain ridiculous as Melbourne escorts also tour around the country and visit other states with advertising-friendlier laws. Therefore, most of their websites need to cater to two target audiences and two different sets of rules. On Punter Planet we offer an interstate profile for Melbourne Escorts at no extra cost, so at least non-Victorian visitors can get a better idea of what escorts look like, and the type of services they offer, leading to a better understanding between service providers and their clients. But this is possible at the expense of extra work and a bigger cost for us.

These restrictions that apply to Melbourne escorts ads also conspire against an even level playing field when it comes to advertising directories. If you are an Australian company offering advertising to escorts and brothel services in Victoria, and therefore paying your fair share of taxes too, you'll need to comply with the Sex Work Act. On the other hand, if you are an international social media or classifieds provider, profiting from selling ads to Melbourne escorts among others, you probably won't even know about the Sex Work Act (nor about the Australian Taxation Office for that matter). Websites like Twitter, Backpage, and similar others are lucky to be put in the "far away", "too big", "too hard" basket by the local authorities.

In 2016 it's time again to revise the Sex Work Act in Victoria. The inequalities and unfair situations these Draconian rules have created go also well beyond the advertising domain. Just ask Melbourne escorts, Melbourne brothel managers, and Melbourne escort agents. They will all agree that if sex work is work, Victorian governments have certainly made it an extremely difficult line of work, particularly for whoever chooses to operate within the law.

Far from advocating for the creation of more restrictions in order to create a fairer, safer environment, we suggest that the Sex Work Act should be locked inside a shelf in a museum, and its key be thrown to the murky waters of the Yarra river. The 1994 Sex Work Act, even with its 2011 revisions, should have never overlived the 20th century. It's time to fully decriminalise Melbourne escorts and brothels, and treat them like any other line of work, ruled by the many laws that already oversee the functioning of any type of business.

In the meantime we can only hope so; and whether you are a potential client or a professional companion looking to advertise yourself, we invite you to see our great selection of Melbourne escorts and brothels by following this link. Thank you.

Written by Punter Planet on November 13, 2015. Posted in Advertising Blogs

Are you an escort looking to advertise in Sydney, Melbourne or any other Australian city?

This can be expensive and time-consuming as the offer is big and diverse. It is hard to choose successful ways of escort advertising.

Ask established escorts and each of them will give you different advice. There’s no magic formula; each escort is unique and individual circumstances should be taken into account too.

Are you going to work in a single Gold Coast suburb? Or do you plan to tour Brisbane, Perth, Adelaide and other places? Well, the answers to those questions will start helping you.

For example, the escort who offers her services in a single area may benefit from using publications that target her own region. However, the ones who tour around Australia, or the ones working in the largest cities, will probably benefit from advertising in websites with a broader reach, such as this one.

That’s just one of umpteen things to consider when looking for effective escort advertising. We can’t cover every scenario, so let’s cut to the chase and see if Punter Planet is the right vehicle for you. 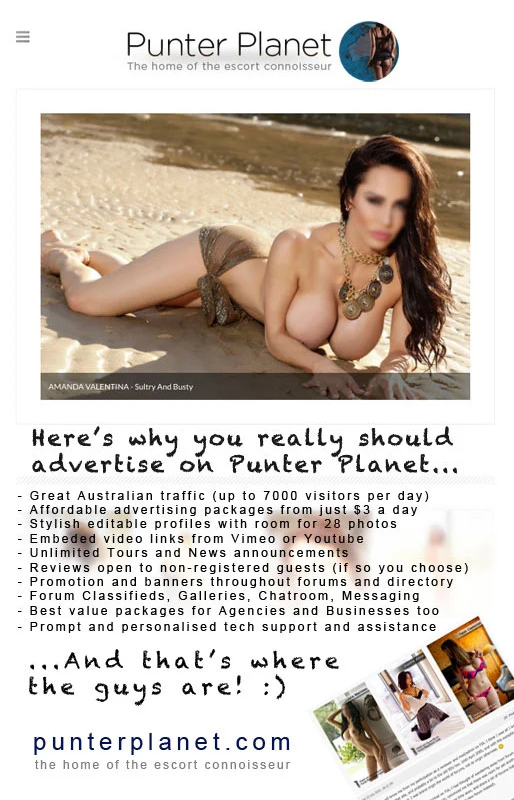 (Jump to our ad features page)

Let’s take a look at Punter Planet’s advertisers, particularly those who have published their profiles here for years, and see what they have in common.

Well, this is a site with a modern and stylish escort directory, and one where clients discuss and post reviews about escort services. That generally appeals to escorts whose offer can match most reasonable expectations. Those who have a sense of pride about the services they provide. The typical Punter Planet advertiser is a true professional and believes in honest advertising. She knows that word of mouth recommendations from real clients – what we call reviews – can really help her career and her bank account too. Does this appeal to you?

Naturally, we cannot provide reviews as part of our escort advertising. They wouldn’t have any value. However, our packages are designed to give you visibility across our entire online community. We are so much more than just a static directory. You’ll gradually enhance your presence and be able to attract clients who will tell others about you. The more hands-on you are prepared to be about your ads and news, the better it will work for you.

We are consistently the Australian escort-related website with the most traffic. That gives advertisers great exposure, and punters get the best selection of escorts the Internet has to offer.

Please step inside our site, take a look around, and do feel free to contact us. We’ll be very happy to assist you.